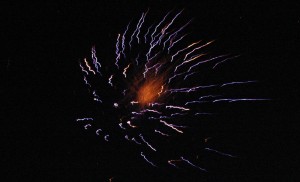 Commissioners Charlie Corbett and Sarah Pelican, who ran last November on platforms of fiscal austerity, voted for the reinstatement of the fireworks, while Commissioners Jeffrey Bunch, Tim Poynter and Mayor Arlene Filkoff voted to stand by the decision they made last summer to forego the 2012 July 4th fireworks.  Poynter pulled the item from the consent agenda, which would have involved spending an unbudgeted $13,200, saying that he did not understand why it was back for consideration.

Both Commissioners Corbett and Pelican indicated that they felt the money could be justified to celebrate the birthday of the country.  Mayor Filkoff recounted the many difficult decisions the FBCC was forced to make last year during budget preparation, including cutting grants to non-profit organizations and eliminating jobs from the city’s payroll.  Two Fernandina Beach citizens also spoke against funding the fireworks.  Lynn Williams opined that the city shouldn’t be spending money at a cost of a thousand dollars per minute on Chinese products (fireworks) unrelated to the founding of our country to celebrate war.  Robin Lentz said that as much as her children love the fireworks, the city doesn’t have the money.  She added that there will be fireworks on the south end of the island on July 4th.  No one from the public spoke in favor of funding the fireworks.

Commissioner Poynter invited downtown merchants to “pony up” if they felt that fireworks were important to their business, noting that $13,200 amounts to half a year’s salary for a city clerk.  Some audience members found the business argument puzzling, since almost all the Centre Street merchants close well before the fireworks display.